The Hummus Among Us 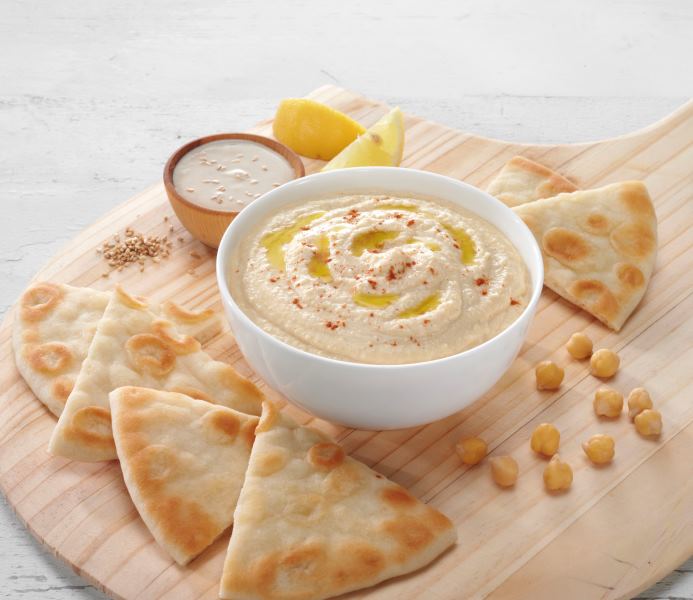 Created in Egypt, Hummus is a staple of Middle Eastern, North African and Mediterranean cuisine, and has long been used in its history as a spread for breads/pitas/flatbreads, as a side dish with another protein or as a main course all on its own. For much of the world, Hummus has been a hero on menus for centuries. In America, however, its rapid rise to fame is a more recent phenomenon and one that operators can seize upon for menu innovation and excitement.

In the last 10 years, Hummus’ penetration on American restaurant menus has doubled.[1] Among the many factors that have contributed to Hummus’ growing popularity is consumers’ recognition of its protein-packed nutritional benefits, simple ingredients and better-for-you alternative as a dip. More recently we are seeing the new wave of popularity coming from Millennials and Gen Z consumers that are looking to shift away from consuming animal products or towards finding more value-added and flavorful ingredient options in their foods. For this crowd, Hummus embodies a perfect, tasty and protein-packed plant-based option.

Plant-Based Proteins for All Generations
It’s worth mentioning, however, that the plant-based protein movement is expanding its reach from Millennials and Gen Z to older age demographics, as well as being a popular dietary path for athletes and celebrities. Hummus provides these everyday Americans and taste-makers with an easy to eat and easy to prepare protein with lots of flavor.

Customers who aren’t Millennials, Gen Z, celebrities, athletes or eating a plant-based diet can still seek out and enjoy Hummus, especially because it makes a great addition to American comfort foods due to its versatility, adaptability and nutritional values.

Hummus as an Ingredient
Recently chefs have seen great success with Hummus by recognizing its natural, neutral flavors and capitalizing on it as a versatile base to create more nutritiously positive options for some comfort food classics. For example, using Hummus as a replacement for mayonnaise in a classic tuna or chicken salad sandwich enhances the nutritional elements of the dish. We have even seen college menus substitute Hummus for cream cheese as a bagel spread. For vegetarian or vegan sandwich options, Hummus is an excellent protein-powered spread.

But while many condiments, sides and proteins in typical American diets provide empty calories, Hummus’ nutritional benefits make it a tasty, low-guilt option, considering it is not only packed with plant-based protein as mentioned before, but rich in ingredients proven to help fight inflammation. It also provides an option for diners with restrictive diets because it is naturally free of gluten containing ingredients, nuts and dairy.

Similarly, the rise in popularity of the health-conscious Mediterranean diet has made Hummus a rock star on American menus. American chefs were quick to capitalize on Hummus’ low-guilt, snackable qualities and realized that it fit in well with the Mediterranean diet. Given this diet’s focus on vegetables, healthy proteins and whole grains – all of which can be served with or make up Hummus, it makes this pivotal ingredient an entry point for many diners into Middle Eastern and Mediterranean cuisines.

Chefs’ experimentation with flavor innovation has also driven the expansion in Hummus menu application. They have discovered that not only is Hummus a great condiment replacement, but by exploring their imagination and creativity to combine Hummus’ natural Tahini flavor with other profiles they can create additional flavor excitement within their desired applications. By adding flavors like Roasted Red Peppers, Jalapeno, Garlic, other savory and even sweet flavors, or alternate bean options, chefs have unlocked the flavor and pairing possibilities for what Hummus can mean to American menus.

Hummus has had a long journey to rise to prominence in the United States, but since its boost in popularity in the last decade it has become a go-to for operators who are looking to add the benefits of Middle Eastern/Mediterranean cuisine to their menu, want to expand their protein options to include plant-based offering and are interested in adding a versatile ingredient that serves as the key for unlocked flavor potential.